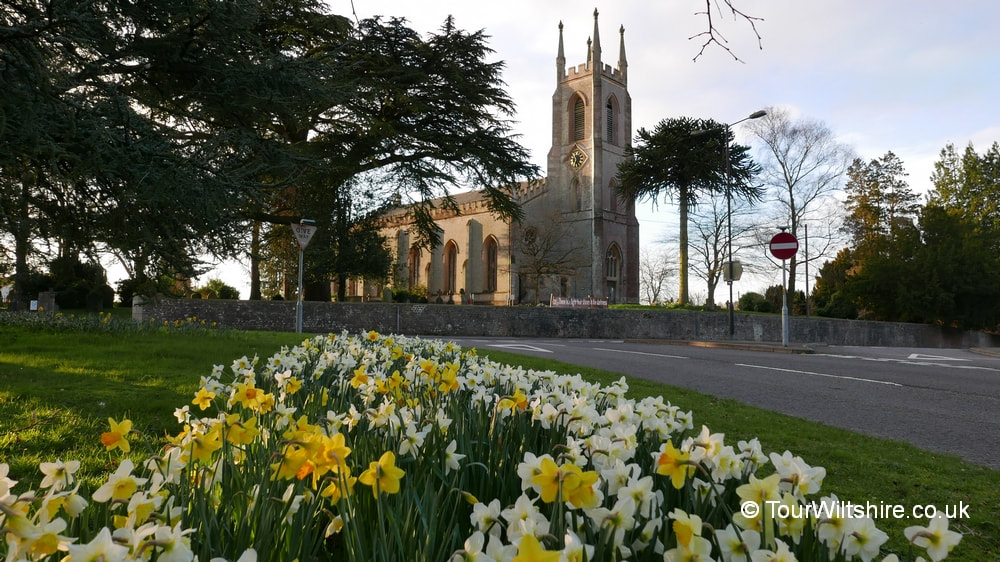 Christ Church, Warminster, Wiltshire
Warminster has several notable 'institutions', or businesses, including: the army; architecture; beer; gloves; one of the few local newspapers in the UK still in private hands; live entertainment; and lions.

Being on the edge of Salisbury Plain Warminster has been an important base for the army since the Second World War, and townsfolk have become used to the familiar 'whump' of high explosives detonating behind the town, whirring helicopter blades, and rumbling tanks. During the Second World War thousands of American troops were stationed in and around the town, as they prepared for D-day, and one John Deere Battalion soldier, who survived the war and went on to become a professional artist, left some excellent topical cartoons in a former canteen in the town.

There are few recently constructed buildings of particular note in Warminster, except possibly the controversial biogas installation, which supplies around half of the town's electricity, ethically. However there are in excess of 200 Georgian and earlier buildings, as early as the 11th Century Minster, these are listed and protected for their architectural interest. One such building is Britain’s oldest working maltings, Warminster Maltings, used to make some of the best beers.

Whilst it doggedly refuses to change with the times, it has no online presence, the Warminster Journal has been a loved institution in locally owned hands since 1881. Two members of staff of the Warminster Journal apparently started the rumour of UFO sightings in 1965 as a prank, taken up seriously by national media and happily fans of fake news continue to debate sightings, which today are actually practicing pyrotechnic planes based on the outskirts of the town.

Dents glove factory, now in a new building on the edge of town, was founded in 1777, and has been supplying gloves for royalty since the reign of George III, including Queen Elizabeth II’s coronation gloves. Dents has a very interesting small museum which can be visited by arrangement, whose exhibits include one of Elizabeth I's coronation gloves, and a pair of King Charles I's gloves. They have also made gloves for movies including James Bond, Batman, and Wonder Woman. 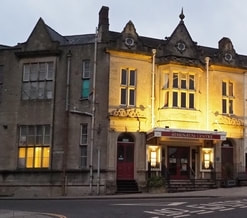 The Athenaeum, Warminster.
The Athenaeum was formerly a lecture hall, and famous people to speak there included poet and playwright Oscar Wilde, Methodist preacher and founder of the Salvation Army General Booth, and suffragette Emmeline Pankhurst. The Athenaeum later became a centre for performing arts, and most popular as a cinema, especially during the Second World War when the town's population temporarily swelled with American troops, but ultimately it lost out to the purpose built Regal Cinema in Weymouth Street, itself now gone. Later the Athenaeum saw the likes of Sir John Mills, Wendy Craig, Timothy West, and George Melly, but with overstretched ambitions went into liquidation. Today the theatre attracts less well known, but still welcome, performers including national and local acts and artists.

"It has recently been discovered that the row of buildings between the Athenaeum in the High Street and North Row contain the substantial remains of jettied timber-framed houses, probably shop-houses of the late medieval/early modern period. No. 16 (Bon Bon Chic) was dated to 1513 in 2014. No. 6 High Street (Café Journal) was found to date between 1499 and 1531. Cordens (no. 4 High Street) is likely to be the oldest in the row from architectural details evident. Fragments of earlier buildings have been uncovered at the Bath Arms (now Wetherspoons) and 32 Market Place (Coates and Parker) which hint at the type of buildings that preceded the present shops." (Wonderful Warminster – the Warminster Buildings History Project)

Warminster is bordered by the Longleat Estate, home to one of the finest Elizabethan houses, and the first safari park in the United Kingdom.