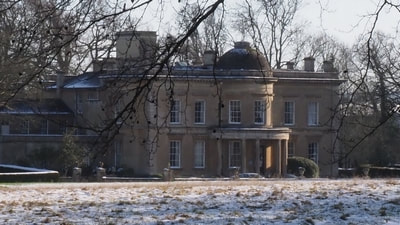 Sutton Veny House
The parish church of St John the Evangelist was built in 1866-68 and is approximately half a mile from the medieval St Leonard's church, which had been damaged by subsidence. St John the Evangelist Church was paid for by members of the Everett family in memory of Joseph Everett who had died the year before and who had built Sutton Veny House. There is an Australian War Graves cemetery at the church, maintained by the Commonwealth War Graves Commission, where 127 men of the Australian Military Forces, as well as five Australian nurses, were buried during the First World War,. Most died in local hospitals, especially Sutton Veny's own war hospital and nearby Warminster Hospital, of the flu pandemic or from their wounds. St Leonard's church, at the end of Duck Street, was built in the 13th Century, incorporating a 12th Century doorway. After it was replaced by St John's church in 1868 the chancel was used for a time as a mortuary chapel, while the nave was partly dismantled and fell into ruin It was declared redundant in 1970 and is now in the care of the Churches Conservation Trust.

The aforementioned hutted army hospital opened in the parish in 1916, with beds for 11 officers and 1,261 soldiers. After the armistice in November 1918, the 1st Australian General Hospital was transferred from France to Sutton Veny, hence the unfortunate graves of Australian war dead at the church of St John the Evangelist. During the Second World War, in 1943, Sutton Veny House was an army headquarters, and units of the United States Army were barracked in the area in preparation for the invasion of Normandy in June 1944. Sir Francis Lacey (1859–1946), cricketer and MCC secretary, first person to be knighted for services to any sport, lived at Sutton Veny House from 1922 until his death in 1946.

Sutton Veny has a primary school and a pub, The Woolpack.
STAY SAFE AND BEAT CORONAVIRUS
by the same photographer:
Disabled Rambling | Chicken Leg | Imber Village