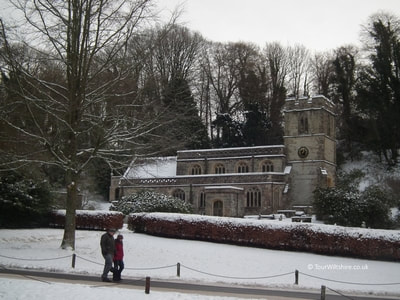 St Peter’s, Stourton
The Stourton family owned land from at least the 12th century and their wealth was increased by William Stourton Speaker of the House of Commons. His son, John, was made 1st Baron Stourton in 1448. The 8th Baron and four servants were hung for the murder of two of their neighbours. Though the Baron didn't himself slit their throats he ordered it. Initially he refused to admit it, but given the choice of admitting it and being hung, or not admitting it and being squashed to death under heavy stones, he relented and was hung in the market place in Salisbury on 16 March 1557. In 1605, in the aftermath of the Gunpowder Plot, Edward, 10th Baron Stourton, was imprisoned in the Tower of London due to his having received a letter from his cousin and brother in law, Sir Francis Tresham, telling him to be absent from Parliament. Francis was one of the leading conspirators in the plot. Nothing was proved against Edward and it emerged that several other Catholic peers had received similar warnings. He was released without charge. Edward's son and heir, William, was persecuted as a royalist and papists, a son became a monk and daughter a nun. Deep in debt the 13th Baron, another Edward, began selling off land in 1688, and raised mortgages against Stourton House and manor, which was eventually sold in 1714 to Sir Thomas Meres, the main mortgage-holder. After Thomas's death in 1715 his son John sold the property to Henry Hoare who had Stourton House pulled down, and Stourhead House was built nearby between 1721 and 1724. Bonham Manor manor was acquired by Thomas Stourton in 1714 and bought by Henry Hoare in 1785, the Stourton family retaining part of Bonham Manor. Bonham Manor and cottage date back to the 14th century and are Grade II* Listed. Whilst Stourhead House, Gardens, Lake, and most of the arable land were given to the National Trust the Hoare family remain having retained mainly woodland, and properties, forming Stourhead (Western) Estate, and own Stourhead Farm Shop.

The parish church of St Peter dates in part from the late 13th century. The Spread Eagle Inn is the estate's former coaching Inn dating back to 1772, as well as serving Stourhead visitors it is very much a local pub.
STAY SAFE AND BEAT CORONAVIRUS
by the same photographer:
Disabled Rambling | Chicken Leg | Imber Village