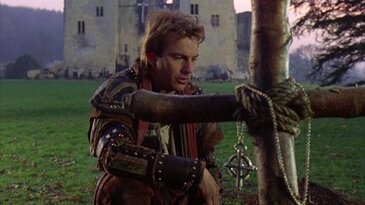 In 1392 Baron Lovell was granted permission by King Richard II to build a castle on the site. The design was inspired by the castles then in fashion  in France; but its own design is unique in Britain. The inclusion of several self-contained guest suites was also unique in Britain at that time. In 1461, after the fall of the Lovell family following their support of the Lancastrian cause during the Wars of the Roses, the castle was confiscated and passed through several owners until bought by Sir Thomas Arundell in 1544. The castle was confiscated when he was executed for treason in 1552, but in 1570 was bought back by his son, Sir Matthew Arundell.

The Arundells, led by Thomas Arundell, 1st Baron Arundell of Wardour,  were Royalists in the English Civil War. During that conflict, Thomas Arundell, 2nd Baron Arundell of Wardour, was away and had told his wife, Lady Blanche Arundell, aged 61, to defend the castle with a garrison of 25 trained fighting men. On 02 May 1643 Sir Edward Hungerford, with 1,300 men of the Parliamentarian Army, demanded admittance to search for Royalists. He was refused and laid siege, setting about the walls with guns and mines. After five days the castle was threatened with complete destruction. Lady Arundell agreed to surrender, and the castle was placed under the command of Colonel Edmund Ludlow. Lady Arundell's husband had actually died of his wounds after the Battle of Stratton the same month of the siege , so it was their son Henry, 3rd Lord Arundell, who brought a Royalist force to reclaim the castle. By November 1643 he had blockaded Wardour, and after mining the walls also blew up much of it, obliging the Parliamentary garrison to surrender in March 1644.

Having suffered so much blowing up the castle was left uninhabitable, but enough remains for children and adults alike to enjoy exploring the various floors, and play sword fighting through it. In fact from the front it looks in remarkably good condition, but go around the back and it's a different story!