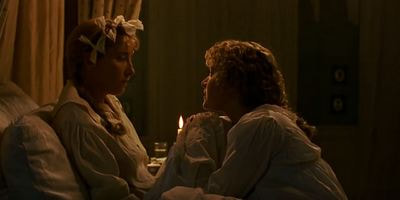 Sense and Sensibility - Emma Thompson and Kate Winslet
Mompesson House was built for Charles Mompesson in 1701, it is one of two houses open to the public in Salisbury's Cathedral Close, the other being Arundells, which was the late Prime Minister Edward Heath's home. Charles was for some years an MP – one of two for the rotten borough of Old Sarum which had an electorate of only ten! A 'rotten borough' was a parliamentary borough or constituency in England, Great Britain, or the United Kingdom before the Reform Act 1832, which had a very small electorate and could be used by a patron to gain unrepresentative influence within the unreformed House of Commons. The property was always leasehold, as are most in the Close, until the Dean and Chapter of Salisbury Cathedral sold the freehold of the house to the Church Commissioners. The house temporarily acted as the official home for the Bishop of Salisbury but it proved to be unsuitable so the Church Commissioners decided that the house would be sold to a London architect, Denis Martineau, in 1952, on condition that the property be given to the National Trust on his death, which it was, in 1975. there is a small garden behind, and small cafe. Disabled Access Statement

Film/TV Location For: Sense and Sensibility; After The Fair
STAY SAFE AND BEAT CORONAVIRUS
by the same photographer:
Chicken Leg | Imber Village