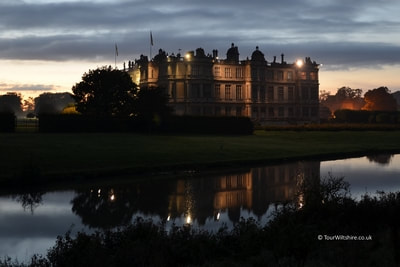 Longleat House
Longleat House can be visited at a reduced cost if not going to the safari park as well. Longleat was previously an Augustinian priory. It suffered the same fate as other Catholic institutions when Henry VIII threw a fit because the Pope wouldn't grant him a divorce from Catherine of Aragon, who had 'failed' to give him any surviving sons, he sold off, or gave, the monasteries, priories, convents and friaries, and their lands, to friends and supporters and made himself head of the church in England. In short the corrupt Sir John Thynne bought Longleat for just £56. Thynne spent time in the Tower of London and survived with a hefty fine, his boss lost his head.

The twist was that Henry's only legitimate son, Edward VI, came to the throne aged just 9, and died when he was just 15 years old, in 1553. The throne then passed to Edward's sister, Mary who also died, then to Elizabeth I in 1558. So with Longleat House being completed in 1580, slap bang in the middle of Elizabeth's 45 year reign, it is truly Elizabethan. At least on the outside, at least as far as the walls are concerned. The inside underwent modernisation with a new Christopher Wren staircase in the mid 17th Century, which was ripped out in the early 19th Century, when the stables and orangery were added, and later given a Renaissance style interior. The formal gardens were swept away by Capability Brown and Humphrey Repton. All of these changes look good, and just mark the passage of time over a family home. The problem came when it was decided to locate the totally incongruous buildings serving the theme park, that sprang up to pay for the upkeep of the family's estate, so close to the house. The whole should have been kept at a distance, as was the safari park, and later Center Parcs, the effect is to detract from a visit just to see the house and grounds. But turn a blind eye to the oversized plastic lion at the front, and the buildings behind, and a visit to see the house can still be enjoyed.

Lady Elizabeth Percy was just twelve years old when, already very wealthy, she married twenty year old Henry Cavendish, Earl of Ogle, a year later, 1 November 1680, he was dead, cause unknown. Twelve months later, on 15 November 1681, at the age of fourteen, again under pressure from her controlling grandmother, who had been bribed by Thomas, she married thirty-four year old MP Thomas Thynne of Longleat. Thomas was a close friend of the Duke of Monmouth, who sought the crown of England and needed money to help achieve it, and Elizabeth had it, Monmouth helped arrange the marriage. However it transpired that Thomas already had syphilis from sleeping with prostitutes, so Elizabeth kept him at a distance until she escaped to Holland and started divorce proceedings. Three months later, on 12 February 1682, Thomas was dead, murdered, in all likelihood on the instruction of her jealous admirer, and maybe lover, Swedish Count Karl Johann von Königsmark. Thomas was shot while riding in his coach with Monmouth in Pall Mall, London, by three men known to the Count, Christopher Vratz, John Stern and Charles George Borosky. The three were hung for the murder, in Pall Mall, the Count was acquitted but banished from the country. Five months after Thomas's murder, clearly in deep mourning, Lady Elizabeth married twenty year-old Charles Seymour, 6th Duke of Somerset. Was it just jealousy that led the Count to have Thomas murdered? Maybe not, the Catholic King of France, Louis IV, feared that protestant Monmouth, the illegitimate son of the then King of England Charles II, would win the crown, he wanted it kept Catholic, and weeks before had given the Count a lot of money. Also the jury had seemingly been bribed by a spy known to be in the pay of Charles II. The Count left England on Charles' royal yacht.

Little or no evidence exists to support reports that Thomas Thynne, 2nd Viscount  Weymouth (1640-1714), of Longleat, is said to have murdered his wife's, Louisa Thynne, Viscountess Weymouth's, manservant, believing him to have had an affair with her, and that he had the servant's body buried in the cellar under the main staircase. It is also said that when central heating was put into Longleat, during the 5th Marquess's lifetime, the body of a man was found buried in the cellars. He was wearing jackboots, which crumbled away as soon as the body was exposed to the air.
STAY SAFE AND BEAT CORONAVIRUS
by the same photographer:
Disabled Rambling | Chicken Leg | Imber Village