Horningsham, Wiltshire
Horningsham is Longleat's village, as Lacock was the Fox Talbot's, as Wilton is/was the Earl of Pembroke's. Essentially Horningsham is the crown jewel of an estate that still comprises 200 cottages, and 10,000 acres. However the estate used to be larger. The safari park doesn't always show a good return. Henry Thynne, 6th Marquess of Bath faced with a death-duties bill of £700,000 put to auction in 1947 a large part of the extensive estate, including, pubs, farms, and cottages, all around but very little actually in Horningsham, of which I now speak, was offered. Horningsham is Longleat's village, and Longleat is part of it. In an even bigger financial crisis Horningsham would be one of the last things to go. With cottages now offered at market rents where once Longleat employees, foresters, gardeners, farm labourers, animal keepers, house maids, etc, lived at peppercorn rents, it is a cash cow, though maybe at the expense of a more stable, mixed, community. The Horningsham portfolio was actually added to in 1956 when Longleat bought the redundant vicarage, for £3,500, they now rent it out for upwards of £2,500 per month. But in the early 1960s funds needed a boost and cottages in Pottle Street were sold, and the more expensive weathered thatch that covered many roofs was replaced with cheaper, more durable, tiles, that was a shame, but it's still a stunning village. So today almost all of the village remains owned and let by the 8th Marquess, Ceawlin, and Longleat Enterprises. Despite all the changes a good community lives on. 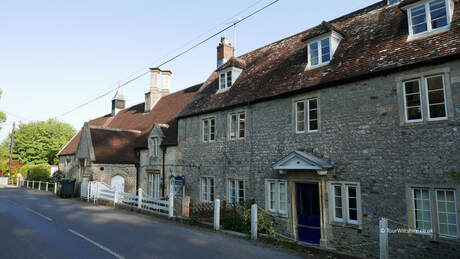 The Church of England parish church of St John the Baptist in Horningsham was founded in the 12th century. The tower is from the 15th century while the body of the church was rebuilt in 1844 at the expense of the Marchioness of Bath. The Congregational Chapel was founded in 1566 when Scotsmen were employed by Sir John Thynne on the construction of Longleat House, a later, 17th century, thatched building remains, where services are still held, it is the oldest non-conformist chapel in use in England. Whereas the lease with Longleat requires that the building remain thatched it is ironic that it was OK for Longleat to de-thatch its cottages when it suited them in the 1960s.

Horningsham Village Hall was built in 1930 by the then Lord Bath, Thomas Thynne, in loving memory of his wife, Violet, who died in 1928, the family continue to support it.

The Bath Arms in Horningsham, at one of the private Lodge Road which leads to Longleat House, was built in 1736, and was a favourite with the 7th Marquess, it's now leased to the Beckford group of inns, an upmarket group that sees Horningsham as a well-heeled village.
STAY SAFE AND BEAT CORONAVIRUS
by the same photographer:
Disabled Rambling | Chicken Leg | Imber Village