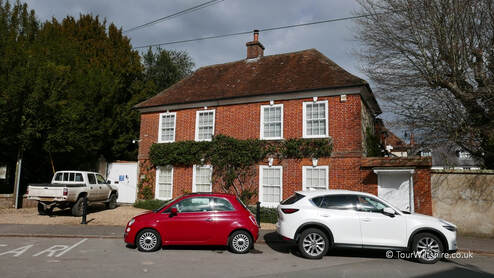 The Old Rectory, Market Place, Wilton, refronted in the 18th century.
Dating property can be very difficult, what may be typical of a period may actually be a reproduction, scroll to the bottom and see examples from the 20th and 21st centuries. Also, and typical around Wiltshire where wealth sprung up from the wool trade, are many examples of what appear for all intents and purposes to be examples of classical Georgian architecture, and often are, however may actually be hiding a medieval timber framed house. When the Wiltshire Buildings Record had the opportunity to exam the roof of No.11 High Street, Corsham, a building officially Grade II Listed as 17th century, it found evidence of it actually being a 15th century timber framed building that had later been updated, so even experts can get it wrong, often due to not getting full access. Have you ever determined the date of a property by what's carved in stone above the front door? It may actually commemorate an alteration to the building, or even a marriage.

Just as the upvc windows in a Victorian house don't date it nor do Georgian modernisations to medieval houses, planning legislation protecting existing dwellings of architectural merit didn't start to evolve until the 1930s, and until 1968 the fine for illegally demolishing a Listed building was just £100. It was also not until 1968 that permission was required to alter a listed home. 1971 legislation empowered local authorities to create conservation areas, this recognises the importance of lesser buildings when they are part of a group. So, for example, in West Amesbury, where the street scene is important, permission was denied for a new vehicular access through a long cob and thatched wall - which scuppered permission for an additional house, but, on application, allowed for improvements to existing dwellings and the favourable replacement of an existing one (now known as The Old Dairy - see below). The more likely a house is to have been owned by someone wealthy the more likely it is to have survived down the centuries, traditional houses built of wood and cob don't survive if they aren't maintained, and often fires destroyed great swathes of towns and villages built of wood and thatch, though these are sometimes rebuilt in stone. Working class homes are also more likely to have been abandoned as mechanisation meant that fewer farm workers were needed, and they moved to the towns, or were forced into workhouses, so their cottages, or shacks, effectively dissolved back into the landscape. The number of farm workers in Wiltshire in 1871 was 27,000 in 2011 the number involved in agriculture, fishing, and forestry was down to 4,105. So the majority of period houses found in villages are either Georgian, re-faced medieval, or Victorian, just as the majority of older properties found in towns, are Victorian.

"The wealth of fine houses hidden down picturesque lanes were derived from the woollen industry in the 17th and 18th centuries.  West Wiltshire was dominated by a small group of entrepreneurs who controlled the woollen industry as landholders, buyers and employers." (Wiltshire Buildings Record)