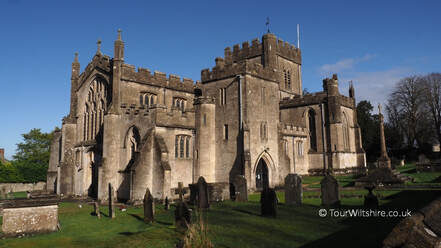 The Priory Church of Saint Mary, Saint Katharine and All Saints, Edington
Four miles from Westbury is Edington. The village is named after and where the Battle of Ethandun took place, in 878 AD, in which King Alfred the Great defeated the Danes and gave rise to the English nation.

Grade I Listed Edington Priory was founded in 1351 (consecrated 1361) by William Edington, Edington's parents were Roger and Amice of Edington. William was born in the village and at the time of the founding was Bishop of Winchester, as well as treasurer of the realm, later elevated to chancellor. After the Dissolution of the Monasteries (1536-1541) the Augustinian monastery became, and still is, the village of Edington's parish church, 'The Priory Church of Saint Mary, Saint Katharine and All Saints'. Most other buildings pertaining to the monastery were destroyed following the Dissolution, though behind the church is 'The Priory' house, which was built shortly afterwards and likely contains elements of the monastic buildings. Edington Priory Church is famous for hosting the Edington Festival, a week-long celebration of church music. "Participants come from many different Anglican and Roman Catholic cathedrals and Oxbridge colleges, and visitors travel to the Festival from all over the world. The midweek Evensong is always broadcast around the world by BBC Radio 3.".

William Ayscough, Bishop of Salisbury and confessor to Henry VI, was murdered at Edington on 29 June 1450 by an angry mob of villagers during Jack Cade's Rebellion. The rebellion sought to end corruption in high office. The Bishop was on his way to his castle in Sherborne, having escaped an angry mob in London, and was apparently taking mass in the the Priory when he was dragged out and killed in a nearby field.

There is a pub, cafe, micro brewery, and farm shop, at the Three Daggers, Edington
STAY SAFE AND BEAT CORONAVIRUS
by the same photographer:
Disabled Rambling | Chicken Leg | Imber Village