(right) row of 17th century thatched cottages, Grade II Listed, The Borough, Downton, Wiltshire
Downton is a village approximately 6 miles south of Salisbury which is probably best known for being passed through on the busy A338 between Salisbury and Ringwood. Whilst there are some attractive houses on this main road as soon as you turn off into The Borough, at the traffic lights, the appeal of Downton becomes clearer, with more attractive homes, some of which are thatched, and a wide green expanse fronting many of them. From the traffic lights on the A338 the road meanders for a mile before leaving the village and along that mile can be found a few local shops and pubs.

For the best places to eat around Downton click here. 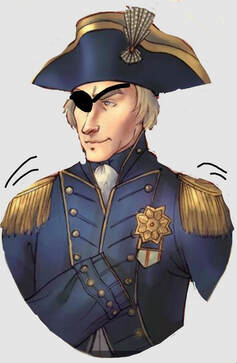 There are a number of Listed buildings in Downton to mention, however the most interesting is on the outskirts, at Standlynch, Grade I Listed Trafalgar House. In 1813 Parliament voted to provide a suitable estate for the heirs of Admiral Lord Nelson and to commemorate the Battle of Trafalgar (1805). When Standlynch Park became vacant it was acquired for Nelson's older brother, the new 1st Earl Nelson, who had lobbied for it through his wife's Walpole connections (!), the house was re-named Trafalgar Park. However Nelson's rightful heir, his one child, Horatia, was born out of wedlock, and got nothing, despite it being his wish that she did. It was noted by Parliament in 1813, but ignored, that Nelson's wishes were "I leave to the beneficence of my country my adopted daughter Horatia Nelson Thompson, and I desire she will use in future the name of Nelson only.". Horatia was in fact Nelson's biological daughter by Lady Hamilton. Lady Hamilton died in poverty and Horatia became a housekeeper. It was not until Queen Victoria stepped in, years later, to order a pension for Horatia's own daughters, that she was even indirectly acknowledged by the country. It is interesting to read Lord Henderson's comment re the Parliament Bill of 1947, which pased and did end the pension, which was then still in payment for Nelson's brother's descendants, "No descendant of the great Admiral has ever held his title, enjoyed the pension, or lived in Trafalgar House. None of the beneficiaries has been a direct descendant of the famous Lord Nelson. All have been collateral descendants. Parliament was not unanimously in favour of the Act of 1806. Doubts were expressed at the time as to the desirability of paying a pension not to direct descendants but to collateral ones. Mr. Francis said at the time: "Lord Nelson's collateral relations personally are unknown to the public, and can have no claim but what they derive from the accidental honour of bearing his name and from services in which they had no share. The gratitude due to his memory would, in my opinion, be better expressed with less profusion." Notwithstanding these and other doubts that were expressed in Parliament, a perpetual pension of £5,000 a year was voted and a further sum of £99,000 was provided to purchase the Trafalgar Estates. The pension has now been paid for 141 years." (TRAFALGAR ESTATES BILL. HL Deb 24 April 1947 vol 147 cc125-8). We complain about corruption in British government, where favours and relationships are repaid from the public purse, and we should, but it's probably less so now, or at least not so blatant. Oh by the way the now distant relatives were allowed to sell Trafalgar Park following the Act of 1947, and keep the proceeds, which they did the following year.
Anyway back to Downton's Listed buildings, of which there are 149. These also include the Manor House, near the parish church, Grade I listed, early 14th century, with attached Chapel. The Moot, in Moot Lane, is a very attractive Grade I Listed House, circa 1700, with attractive railings and gates to tits former garden directly opposite, on the other side of the lane. This garden, which extends to 8 acres and leads down to the River Avon, is now in the hands of a charity, and open from dawn to dusk every day, events are regularly held there. Near the bridge is Waterside Mill, Grade II, a former 18th century corn mill, then power station, and now a home; there's 'The Goat' in The Borough, - a Grade II* pub; The Courthouse, also Grade II*, around the corner from the Goat in South Lane, with a date stone of 1673; and the Grade I Listed 12th century Church of St Laurence, at the end of Church Hatch, is also worth visiting. The artist John Constable clearly thought that Downton was worth visiting, in 1820, he sketched the Avon with the church in the background, this is held in the British Museum, one other of his of Downton is known to exist, and a third of his, dated the same day, of the New Forest, may be of around Downton it being on the edge of the forest.

1836 saw great hardship and the parish paid for more than 200 of its people to emigrate from the village to Canada.

During the 1960’s the Downton Engineering Works were world renowned for their development of racing car components, and the largest employer in the village. Film stars, models, actors, celebrities and members of the Royal family bought Downton modified cars, but everyone was expected to settle in cash or cleared funds, even the equiry for Lord Snowden who was sent away until Buckingham Palace wired the money!

There are several shops including the Stable and Wick bakery and farm shop, and three pubs: The aforementioned Goat, The Wooden Spoon, and the Bull Hotel.
Excerpts From The Wiltshire Council Timeline Of Downton (scroll)
C.100 BC - Tribes living in the Downton area were from a wave of Celts from northern France.
C.1066 - Downton lost 250 acres of land to the King's New Forest, south and east of the village.
1086 - Downton becomes part of the Salisbury Diocese, although mostly still owned by the Bishop of Winchester. The Bishop had seven mills built on his estate.
1140 - Norman motte and bailey castle built by Bishop Henry of Blois.
1147 - Count Patrick seized Downton Castle.
C.1190 - Bishop's Palace built.
1215 - Fulling mill mentioned - one of the earliest in Wiltshire.
C.1247 - New mill built.
1315 - A terrible harvest took place. The price of corn had trebled and death rates increased by 10%.
1348-1350 - The Black Death. Downton shrinks considerably.
1385 - The main road to Salisbury, Barford Lane, is referred to as the "common King's Highway".
1642 - Charles I stayed in Moot House
1698 - 336 people were making lace in Downton at this time.
1710 - The paper mill began working and continued to do so until WW1.
1800s - Lace making died out.
1832 - Cholera epidemic.
1864 - A railway built through the parish.
1866 - Salisbury and Dorset Junction Railway built Downton Station halfway up Lode Hill on the Salisbury - Romsey line.
1884 - Downton railway disaster, 45 people killed.
1914 - Papermaking ended.
1923 - Fire destroyed the Moot House. Moot house rebuilt.
1934 - Downton Engineering began as a motor garage at Mesh Lane.
1940 - German landmines landed in the water meadows and on the Cross in the middle of Downton Borough.
1980 - The Cuckoo Fair revived in the Borough.
1990 - A mains gas pipeline was built to the village
1998 - Main tannery building converted into luxury apartments
STAY SAFE AND BEAT CORONAVIRUS
by the same photographer:
Disabled Rambling | Chicken Leg | Imber Village